Free 2-Day Shipping On All Orders 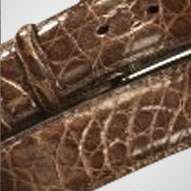 The story of the American Alligator is one of the most interesting survival sagas in global history. American alligators are truly dinosaurs with evidence of their existence dating back some 150 million years. They are also the largest of all crocodilians. Males can grow to lengths of 18 feet, weigh nearly 1000 pounds and eat anything they can catch. Humans are the primary threat to the American alligator. During the late 1960s, alligators were hunted to near extinction, however, they have rebounded remarkably through extensive conservation efforts in their habitat states. Today, strict laws and enforcement efforts control the number of wild animals harvested each year. Additionally, the alligator farming industry has grown to over 200 farms in Louisiana and Florida. American alligator skins are known throughout the world for their consistently high quality and rich, exotic appearance. 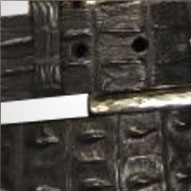 Hornback crocodile differs from the Sueded Nile crocodile and Caiman in many ways. First, the backstrap of the skin is used as opposed to the belly of the skin used in sueded croc and caiman products. This gives a totally different appearance due to the raised scutes which have a three dimensional look. The appearance is further enhanced through the tanning and dyeing process. Torino's Hornback crocodiles come from South Africa and live along the Nile Basin, and Madagascar in rivers, freshwater marshes and mangrove swamps. The Nile croc is bone free in the backstrap area so the leather quality is uncompromised. Smaller skins are used for the Hornback belt so that there is a consistent pattern throughout the belt. This is a quality feature that is noteworthy since it adds to the cost of the product and truly makes each belt exclusively one of a kind. As with Sueded Croc and Caiman, Hornback crocodile is not endangered. The crocodile population has grown steadily throughout Africa through conservation efforts. 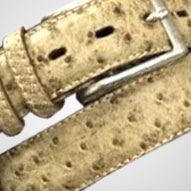 Ostrich leather is known as one of the most luxurious leathers available. Its softness and exquisite texture make it the perfect choice for many types of products. Torino uses two types of ostrich leather. Quilled ostrich, which comes from the back of the animal and Ostrich leg, which has a totally different appearance and hand. Both skins come from South Africa in the high desert area called the Karoo. Ostrich are well suited to living in this arid climate and thrive there. Conservation efforts have brought this great bird back from near extinction as they were hunted to near extinction for their beautiful feathers during the 18th century. Today, ostrich farming is alive and well in South Africa. Ostrich meat is known as a delicacy and offers a healthy alternative to beef, ostrich feathers are still used worldwide for decorating and in costumes and ostrich skins make some of the most beautiful products available today. 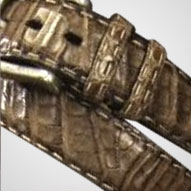 South American Caimans are a species of crocodiles living in fresh and even salty and brackish areas of Central and South America. The largest populations live in the swamp and even some forest areas of central South America, such as parts of Argentina, Bolivia, Paraguay and Brazil. Caimans are smaller than their African and American cousins usually growing to five or six feet long. They are not endangered and are flourishing in the wild. The belly section is used which is soft and pliable after tanning and usually has a matte finish. Torino's styling interpretation is to maintain the matte finish using Caiman skins and to develop styles that are more casual in appearance. The scales are rougher in texture than those of the American Alligator as evidenced by the pitting appearance. This is also one of the easiest ways to know whether a skin is alligator or caiman. South American Caiman belts are an alternative to the American Alligator, Hornback Crocodile or Sueded Nile Crocodile items.